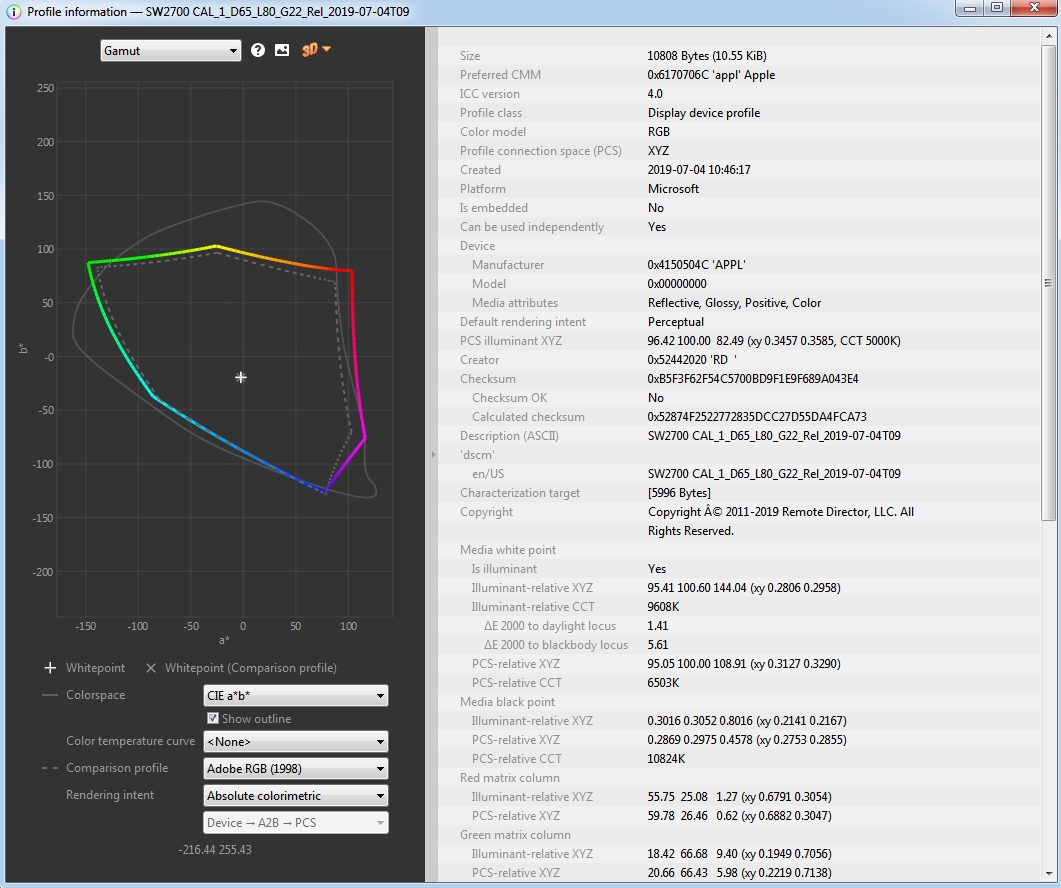 SW2700PT has the following problems:
-very bad uniformity in almost all models. 15% of good ones like yours makes them a bad investment, a lottery... you may won but it is not common (and yors is limited to factory presets, CALx behave worse)
-PME: unsuitable spectral correction for i1d3
-PME: low number of measurements result in bad a*b* range in un preconditioned panels

note:
Benq measures in factory uncalibrated screen behavior .. which is essentially a profile (although may be not in ICM format, just raw data). Using that data computes a calibration for several targest: AdobeRGB, sRGB, P3... and writes it in HW LUTs present n monitor (and locks them, you can only write CALx).
Nec takes a different approach. They write measured monitor behavior into monitor's firmware. Then they inlude a processor in monitor that can calculate on demand any transformatuon from native "raw" state to whatever target you want: that is a calibration.
So SW2700PT has a calibration (stored in its internal HW LUTs) computed by Benq at factory (computed from raw measured data... but they DO NOT include measured data in monitor, they just write computed correction), NEC PAs have raw data stored in firmware so they can calulate calibration on the fly (if data is accurate)

Issues that you may have seen in PA271Q thread are related to that engine (and SV2 software). Maybe NEC measured them in a wrong way, so raw data they use as starting point for its calculations is wrong... or maybe the BIOS/software embebed in monitor is wrong. So we see the erros that Enio and others have reported.
Some of them are affected, others not. It is a QC issue.

Anyway an Eizo CS2730 is 1000 euro monitor and beats SW2700PT in every measurable aspect for just a little more money... there is no battle. Benq is dead before drawing its gun.

PS: Eizo has something close to that Spectraview engine for their lut-matrix monitors (CS and some CG) and for their LUT3D monitors (CG "pros"). Coloredge monitors have stored in firmware actual measured data about how they behave, so they can calculate calibrations on the fly using OSD.
Dells, LG,s Benqs... they only hace a computed calibration but they lack of the original measured data so you cannot change factoy calibration target on the fly.
That means that low cost widegamuts play a different sport than PAs and CG/CS, not a different league.
Na górę

Vicent pisze: ↑
26 lip 2019, o 22:15
note:
Benq measures in factory uncalibrated screen behavior .. which is essentially a profile (although may be not in ICM format, just raw data). Using that data computes a calibration for several targest: AdobeRGB, sRGB, P3... and writes it in HW LUTs present n monitor (and locks them, you can only write CALx).
Nec takes a different approach. They write measured monitor behavior into monitor's firmware. Then they inlude a processor in monitor that can calculate on demand any transformatuon from native "raw" state to whatever target you want: that is a calibration. ...

Vicent pisze: ↑
26 lip 2019, o 22:15
note:
Benq measures in factory uncalibrated screen behavior .. which is essentially a profile (although may be not in ICM format, just raw data). Using that data computes a calibration for several targest: AdobeRGB, sRGB, P3... and writes it in HW LUTs present n monitor (and locks them, you can only write CALx).
Nec takes a different approach. They write measured monitor behavior into monitor's firmware. Then they inlude a processor in monitor that can calculate on demand any transformatuon from native "raw" state to whatever target you want: that is a calibration. ...

That is not even close to what I said. Please do not manipulate my words.

Let's try to explain it again. When you calibrate some display:

1- You measure "uncalibrated" behavior the best you can: several ramps from black to R, G, B, a few secondaries... etc. You want to measure "the solid colorspace" of the panel, including inner points.

3- From uncalibrated measurements and calibration target some program computes a LUT, a calibration, a table with correction values. It could be a matrix-lut or a LUT3D.

This is a basic explanation about how all these calibration software work: DUCCS, PME, ColorNavigator, Spectraview II, Spectraprofiler... etc And some do a better job tha others (more measuremenst, better spectral corrections.. etc)

When manufacturer does a "factory calibration" it works in the same way. At the end of this "factory calibration" process some LUT data is written to monitor LUTs, and then locked (read only data).
So all your sRGB, AdobeRGB modes in OSD are just LUTs written on factory, and you cannot modify them.
But you can modify CALx. PME does the same as they do in factory: PME measures uncalibrated behavoir, compute a correction based on your target and upload that correction to HW LUTs in monitor.

NEC & Eizo for their widegamuts takes a TOTALLY DIFFERENT APPROACH from Benq or Dell.
-They write into monitor measured data I described in step 1. NOT correction tables to some target as Dell or Benq... but actual measured data.
-They put a processor on monitor + software to that procesor (in firmware)
-User request with OSD menus a new calibration target... for example certain xy coordinates for white and 2.35 gamma value. Processor reads measured data (measured in factory) and computes LUT values to get desired calibration. Then it writes calibration values into HW LUTs... but these values are not from factory... it calculates them on the fly.

You CANNOT do that with a Benq or a Dell.
You can use PME/DUCCS (which are faulty as we saw in your thread) to calculate IN A COMPUTER a new set of LUT data and upload these new values to CALx mode.
NEC and Eizo can do the same with Spectraview II or Color navigator.

They key difference is that these monitor can do something close to PME/DUCCS but WITH OSD controls (trusting measured uncalibrated data in factory), without a computer.
Why? Because its firmware stores some kind of "native behavior" and they use those vaklues to compute your desired calibration: D50, D65... etc. They are not "presets" ... they are calculated onthe fly.

I mean:
-They can use a computer and colorimeter to compute LUT data (like PME does, but better -unless for PA271Q-)
or
-They can use factory measured data and OSD menus to compute a new calibration inside display, without computer.

They hacve 2 ways of doing calibration. You have just one (PME) that is faulty unless your monitor is well behaved without calibration (for some Benq-SW it may get close to target for others do not). Same for Dell.


I hope that you understand it now. Not the same sport. Same goes for uniformity mapping compensation.

So returning to your VALID complain about these PA271Q units with errors...something is broken inside those displays: factory measured data, software that display processor executes... who knows, hence the errors some users are experiencing.
It should be something related to new backlight, possibly a wrong factory measurement. Why? Because the engine works in the same way for GB-LED like PA272W and PA242W or PA322UHD or old Widegamut CCFL like PA271W.
If the problem is in factory measured data,.. new firmware updates won't correct it. New firmware updates are just "internal processor software" ... but "uncalibrated data" used as starting point for "on the fly calibrations" is unique to each display.
PAs have (or had for older GB-LED models) a feature to update that "uncalibrated behavior" in firmware. That feature is in SV2 software, but AFAIK that feature is not working for PA271Q (only for older models)... so unless Spectraview II get fixed... users won't be able to correct those errors we see in some PA271Q: Thay can measure "native" data from their PA271Q in their homes, but they cannot store it in firmware.
Na górę

I think that Tom01 answered you: "the defects are always the same".

Did they increase the number patches while measuring native gamma ramp? How many patches in previous versions & the newest one? This is important because the number can be used to infer if another Benq SW owner can get fix his display with PME update.

Dell did this for latest versions of DUCCS, so their grey range is better than before when trying to calibrate ppor QC displays like theirs or Benq's.
Poor grey range uncalibrated => more patches needed for fixing it. That's the reason DisplayCAL can get gradients so smooth.
Na górę

Vicent pisze: ↑
18 lis 2019, o 18:10
Did they increase the number patches while measuring native gamma ramp? How many patches in previous versions & the newest one?

In Xrite/PME/etc "naming convention"
Matrix = matrix + equal TRC curves in profile (even if they are not). This way Photoshop causes less rounding errors *IF* grey is close to neutral.
LUT = table + 3xTRC with actual measurements. If actual measurements report not so neutral grey, it get stored, PS reads it and due to its limited precision can cause grey coloration and banding in some setups.
DisplayCAL equivalents, matrix = "single curve" + matrix (IDNK if it is equivalent to BPC=ON or not, in Xrite naming I would say no, but for PME IDNK right now).

Regarding calibration patches, user cannot choose them. You select only profiling patches *if* aviailable. Actual number of old and new uncalibrated gama ramp measurements may be stored in some log files.
Dell fixed a lot of issues going from 11x4 (11 per black to RGBW ramp) to 20x4. The "jump" between measurements per RGBW ramp went from 23 to 12 RGB values. If that 75 measurements are all for native gamma ramp you have about 13-14 values jump, just a bit less accurate. Anyway in the 2 manufacturers errors bellow that jump limit (12 dell, 13-14 benq) go unnoticed or can be corrected just partially. This does not apply to your display which can be corrected in a good way with those 75, but other units may behave worse. Same for Dells.
Check logs if you can to see actual number of measureemnts.
Na górę
ODPOWIEDZ
Posty: 241